I am very proud to tell the world about my first solo art show!

My goal at the beginning of 2015 was to lock in a solo art show. I ended up doing just that with a gallery named Everything Changes gallery (ETC gallery). The gallery is located in the same building as the legendary Zephyr skateboard shop once was. Now called dog town reality. In the fact that the gallery is located in such a historic space, the focus on skate and surf inspired art. This is very important to me because I have been skateboarding for close to 2/3’s my life. The show is open from October 24th till December 5th 2015.
Below are pictures of the show and it’s opening. As well as a short video documentation. 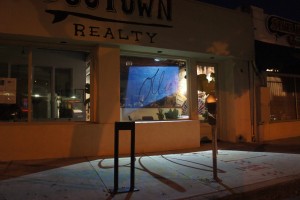 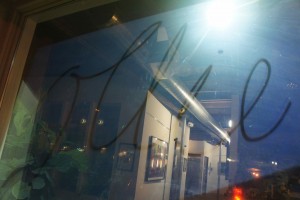 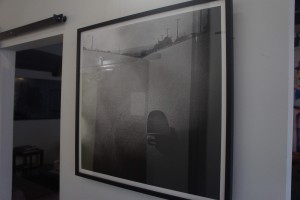 The first photo you see when you walk in the gallery is a picture of the legendary Indian school ditch in Albuquerque New Mexico. 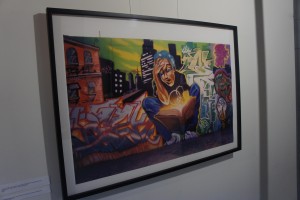 On the opposite wall is a picture I took in 1999 of a graffiti mural in the old Venice pit. The mural pretty much summed up how I felt about skateboarding at the time. 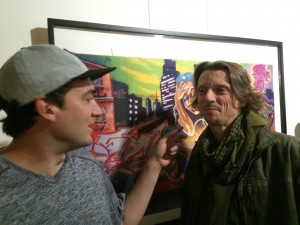 The artist that did the mural is named Mear one. He is very prolific in the graffiti art world. He ended up coming to the show… Which meant a lot to me. 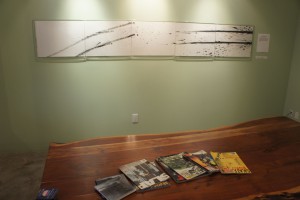 The heart of the show is a piece I did during my time at the Rauschenberg residency. It is a tribute to Robert Rauschenberg. Ink on water color paper. 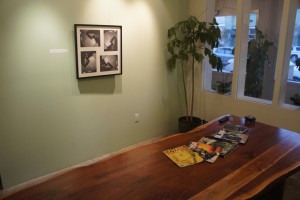 On the opposing wall is photo piece. One picture in all four orientations. It is somewhat a tribute to the learning process I went through learning how to skate. 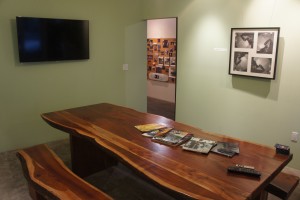 Really what I did was create a place to talk about skateboarding or art or life or whatever people want to talk about. I created two skateboard videos for the show that would play on the the TV on the wall. The first is more of a traditional skate video part with picture of the art in the show and footage of closest friends and I skating over the years, running time 3:33. The other video is over an hour and a half long and is more of a conversation piece than anything, its called iPhone Yardsale. iPhone Yardsale is pretty much all the video from my phone from the last year and a half of my life, put together in different ways. Watch the videos below: 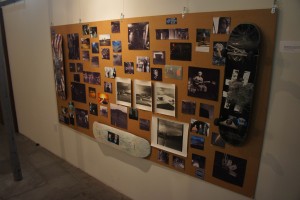 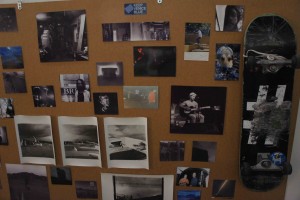 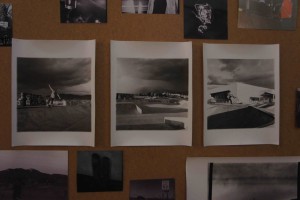 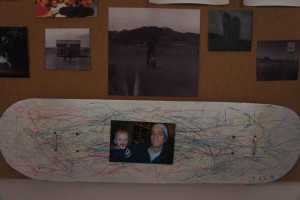 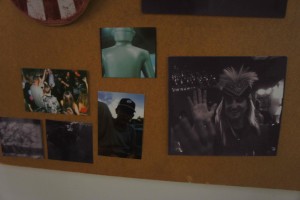 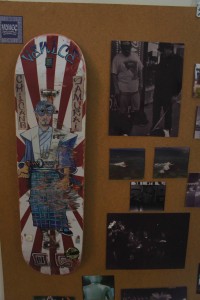 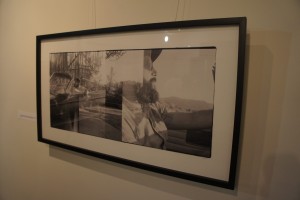 This piece is called, “A good friend will help you move, a great friend will help you move a body”. It is an overlapping exposure, shot on a vintage camera called a robot. Very early in my experiments with the camera I realized that the first three or four shot on the roll overlapped one another. This was my first go at trying to account for that. The person in the picture is my best friend Dave and his 1961 Cadillac. Hence, the name of the piece. 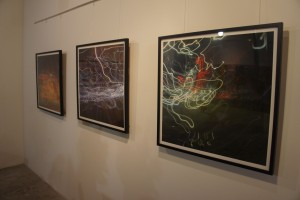 I call these beach vibes… For lack of a better name mostly… But also because they were shot in Venice beach. They are double exposures. 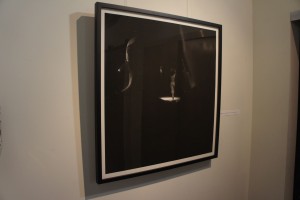 The last piece in the show is a black and white picture of a burlesque dancer. I chose this shot mostly because I thought it would look good on that particular wall. Also because skateboarders like ass. 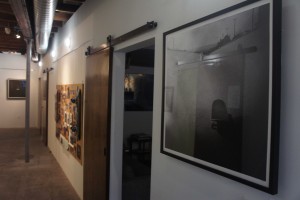 Also in the show during the opening was a video installation I made in 2012 called “I think this is something”. It is basically video, projected on the floor, of my feet as I push on my skateboard. It was set up in the door way next to the indian school ditch photo. I didn’t get any pictures of it but you can see it in the video documentation of the show below.

So thats my show! I am profoundly proud of it! I feel so happy that riding on a board with wheels led me somewhere in life! I just have fun doing it. I plan on skateboarding and making art for the rest of my life. Which means I have a world of hurt ahead of me… I’ll just take it one push at a time!

Thanks so much for your time!
Peace and Love!
Ollie